In this glitch landscape I too can begin to form an idea of myself, embodied in the gestures of landscape(s). Not performing through the vessel that is my own physical body alone, the glitch in my composition allows me to move outside of it (my body), in such a way that the landscape can be both mirror onto the self, the machine that (un)made it, and the others that traverse these landscape(s) with me and together.
I am rereading Marguerite Duras’ The War: A Memoir (1986), pages written of Paris during the Nazi Occupation in 1944. Upon my first reading several years ago, I had interpreted her husband as a Martian, an emaciated, gaunt soldier whose gangrened body lies at the foot of a tree, with green bile at the mouth. A creature from outer space. Upon rereading about her lover, meanwhile, who has no physical attributes, and is a letter and a period, D.  Death in the mirror, barely incarnate. Duras writes, “We see each other every day, D. and I.” (Duras, 1986, p.93) and yet there is nothing to see of D., there is no descriptive dimension and D. may very well stand for Duras herself. Perhaps it is an evocation and representation of self-love. As a diaristic work, Duras speaks of feeling dead, seeing death, wishing death upon herself and others, and of embodying death.
The memoir begins with a speculation of a man ringing the front door: “Who’s there?” “Me.” Narrated in the first person while under the duress of war, Duras processes (and plays) in relation to the men who surround her. To me, the me is he and it is also I, it is a way to think about performative subjectivity as described in Autotheory as Feminist Practice in Art, Writing, and Criticism (2021), where the author, Lauren Fournier, describes her own methodological approach as “grounded in the personal – theoretical, incidental, gut-centered nature of autotheoretical research. I write about works I have encountered in the places where I lived… driven by concerns of interest to intersectional feminisms…” (Fournier, 2021, p.5). It seems difficult to pull apart the memoir’s voices (he, she, they, me, I) in war and trauma, moreover, creating a mirroring effect of the self in one’s practice work and with others within it with a view to research-practice or autotheory.
Fournier quotes Simone de Beauvoir’s The Secret Sex: “Like the mirror, the self-portrait and the “selfie” are ”instrument(s) of doubling” that women might use – allowing someone to see herself as something outside herself.” (Fournier, p.44) While nonetheless conjuring up gendered positions and politics therein, what strikes me most about the two male characters in Duras’ memoir, D., and Robert L. (her husband whom is amongst the soldiers on active duty), are slim physical details: one is capital “D” death, and functions quite transparently as an active subject mirror image for Duras; and the other, Robert L., remains elusive throughout the book until he is found as nearly unrecognizable skin and bones, or in my view, the manifestation of the Martian figure that we have come to know through the popularization of pulp American science fiction following WWII. 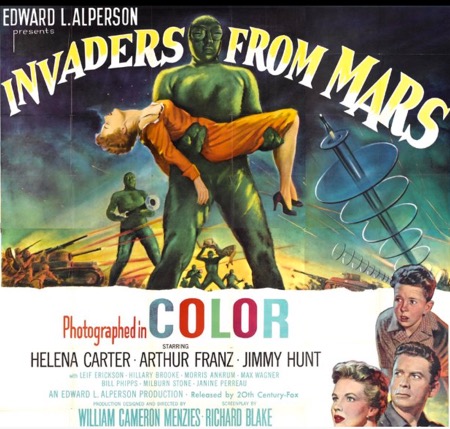 https://www.smithsonianmag.com/air-space-magazine/martians-among-us-2502621/ (Martians Among Us: In this rowdy assembly, you’ll find at least one you know. Smithsonian Magazine, July 15, 2012: promotional film poster from 20th Century Fox for Invaders From Mars (1953), Martians turn Earthlings into zombies. Image capture March 12, 2022
In this image I have here, glitch3,
there is a near mirror like dimensional triangle of black space on the right side to the same light space on the left side. It is like a flag of two equal parts; today, it is like blue and yellow Ukraine, the invasion by Russia and its deafening and resounding fear felt as far away as Toronto. In glitch3, there is some sense of space, perhaps a mountain to climb against a cloudy sky, or a photo of snow across frozen lake and a torn magazine page, two opposing plains.
The glitch takes up 50% of this shot. Legacy Russell, in Glitch Feminism (2021), traces the origins of the word glitch: used by John Glenn in NASA Space’s landing on the moon, noted by Times magazine: “Glitches – a spaceman’s word for irritating disturbances,” and again in 1971, Apollo 14’s failure to perform when a glitch nearly botched landing on the moon. (Russell, p.28). Glitch started to be used by astronauts even earlier than that, in 1961, to describe a change in voltage and a notion of lack of control: “A glitch is a minute change of voltage in a wire which is enough to trigger another system out of proper sequence.” (Pena and James, 2016; Stimson Jr., 1961, p.112) I like to think of Robert L. as a creature from another space (outer space) that eschews gender binaries by being literally out of this world or the worlding described by Donna Haraway in Staying with the Trouble (Haraway, 2016, p.1-8) (and thusly safe from wars altogether, free to play anew). Duras describes first seeing a man returned from the front lines, “He’s a strange color. He must be crying. You couldn’t say he’s thin, it’s something else – there’s so little of him left you wonder if he’s really alive. But no, he is alive, his face is convulsed by a terrifying grimace. He doesn’t look at anything… The grimace may be a laugh.” (Dumas, p.20) Indeed, Russell quotes Kate Bornstein and Zackary Drucker: “When gender is a binary, it’s a battlefield. When you get rid of the binary, gender becomes a playground.” Even though this flag I have here, this glitch landscape(s), seems black and light, it offers, in Russell’s view and mine, liberation and possibility from my own gendered self and human body: “Glitch manifests with such variance, generating ruptures between the recognized and recognizable, and amplifying within such ruptures, extending them to become fantastic landscapes of possibility. It is here where we open up the opportunity to recognize and realize ourselves, “reflect(ing)” to truly see one another as we move and modify.” (Russell, p.28)
glitch3, jan 7, 2022
text3, march 4, 2022