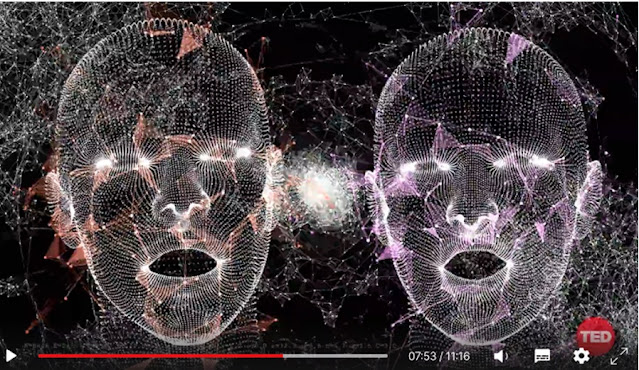 DJ Spooky presents the mouth as a black cavity in A celebration of the history of the internet in art and sound, (2020). In this colossal narrative arc that visualizes the coming together of science and art, the human figures that collect and transmit a visual representation of data have mouths that are black holes – no communicative dots and lines –visual voids. The mouth (the voice, the speech, the utterance, the cry, the coo): warm and vast, or scary and to be avoided, depending on how you roll.

In A Glitch Pedagogy: Exquisite Error and the Appeal of the Accidental, Ernesto Peña and Kedrick James connect inquiry-based learning to the panoramic glitch. With what they call stitch-skipping, they say that “…glitches are visualizations of the sequential processes that went into their making. By doing so, the taker of the photo is formally represented in the resultant image, even though they do not appear as subject. This makes the malleability of representation much more obvious to the observer encountering a glitched image that captures something of the intention of the photographer. Typically, such representations remain indexical, pointing toward an assumed external reality from which the photographer, as the symbolic agent, remains absent. The invisibility of the photographer, the media, or the distribution network, hampers the learner’s ability to develop and utilize critical thinking skills in regard to the politics of representation. This visual glitching process disrupts the illusion of reality conveyed by representational media, enhancing sensitivity to the processes underlying the creation of narratives of truth and fact.” (Pena & James, 2016, p. 116)

I like finding myself amongst an already nascent community of makers and disruptions – as if I have arrived late to an auto(mated) learning group.

This glitch4,
has two circles top right, containers-like. Here the doubling of these two circular forms, soil filled, starts to feel like community made up of my many selves each taking up a space in the sequence of stitched images that make up this panoramic composite.
Of course, in this context, I position myself as the photographer, and author, both. But what starts to happen too is that the glitch becomes a way to disrupt the reality of a common landscape, shared by viewers or users, people alike. Who are the authors of this glitch: the user, the programmer or the device itself creating the glitch? While Pena and James ask these questions in the stitch-skipping process and the resultant product/artefact, I start to write user as Community; the programmer as Staff, and the device itself as the People… toward a mapping of museum space.
I’ll get to that later; meanwhile....
it looks like a wave hitting the shore, sending two barrels up and over the mound of dry unfriendly land. Is it a ditch? In which case it could also be temporary shelter for crabs and other crustations. Those circles could be barrels (shelters), or eyes (shelters), or mouths in the ditch. “Over there it’s evening, too. It’s getting darker in the ditch, his mouth is in darkness now.” (Duras, p.8) From a philosophical perspective, the darkness can either be warm and inviting, or menacing.
Hanif Janmohamed, with whom we are creating, together with Maria Lantin and Melissa Smith, the maker space project, Share Your Inner Selfies, shared with me Inwardness: An Outsider’s Guide (2021), where Toronto-based philosopher Jonardon Ganeri guides us through the many ways in which interiority has been understood through metaphors of mostly light, but also darkness, offering variations and contradictions over time none of which truly satisfy. That said, Ganeri presents early eastern philosophical ideas of the inner self as a vessel to be filled.
As a vessel, I can imagine an interiority that is dark and empty or fecund; fillable and emptied. The mouth in this way becomes a way into this vessel space. A dark mouth in a dark ditch; a doubling, one might even say an ideal insulator for such travels, like a thermos.