What does lunar dirt look like if not composed of many photographic greys in our collective imagination? 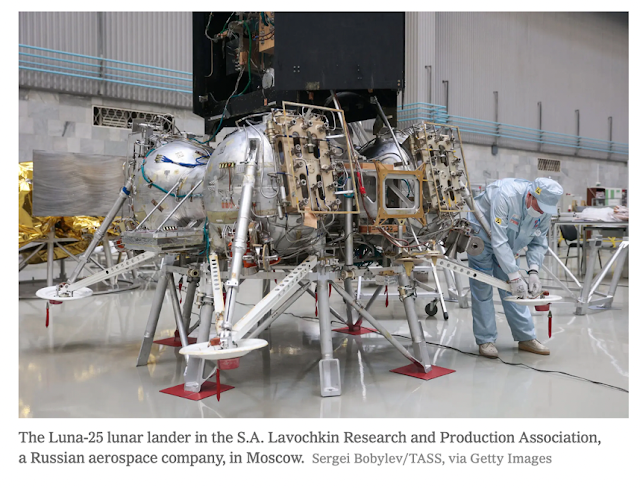 (Image capture of Russia’s Luna-25, preparing for planned moon landing in 2022, image capture March 19, 2022: Roulette, Joey. (March 2, 2022). 2022 Is Full of First Steps to the Moon: Debut rocket launches and robotic lunar missions will make the New Year a curcial prelude to putting astronauts back on the moon. The New York Times. https://www.nytimes.com/article/moon-missions-nasa-2022.html)

Following a sad and comical headlining year of phallic rockets launching and orbiting the Earth, 2022 is a menu of boxy and bulby multi-armed spacecrafts readying to embrace the Moon.

Moon landings are planned from the United States, Russia, India, United Emirates, South Korea and Japan: “Another smaller robotic explorer built by Japan’s space agency is the size and shape of a basketball. It can transform into a rover after deployment, dividing itself in two and using its halves as wheels to rove around and study lunar dirt” (Roulette, March 22, 2022).

Apollo’s 50 year-old landscape is both flat and bulbous, a pot of boiling stew minus the tomato paste. In my glitch7 mission, the skip-stitch is obvious from left to right, suggesting an omnipresent and burgeoning linear sequencing and narrative of colonizing space and land ownership that’s beyond this frozen pool, and Earth.

I think of Dylan Robinson's keynote address for The Politics of Sound Conference (March 18, 2022 at Toronto Metropolitan University). Robinson, shares two public artworks, Is This Our Land? (2017) by Khelsilem and Wave Sound (2017) by Rebecca Belmore. They are ruptures in the narrative of land relations in public art that remains monolithically committed to Indigenous erasure and to upholding land as property.

This linear composition of grey is also evidence of my own complicity in what Robinson describes as an “imperialist nostalgia,” that “re-materializes and naturalizes a settler site.”

Perhaps this glitch at the bottom centre of glitch7, this black doorstop or stair I have found, can offer me a small counter step to the press-and-replay of the settler-voiced, ‘One small step for man, one giant leap for mankind?’

Bruce Damer’s re-telling of the virtual re-enactment (an Internet first in 1999) of the Apollo moon landing upon its 30th anniversary is striking here. A Canadian-American scientist and designer, in Damer’s 2003 paper, A virtual Walk on the Moon, Cyberspace meets Outerspace: Experimental Design Research in a New Medium in Design Research: Methods and Perspectives (2003, The MIT Press, Laurel, B ed.), he writes that the two main conceits for a successful virtual experience, evidenced in recreating the moon landing as a virtual experience, requires an actor to tell an authentic story, and that all people see themselves as participants rather than spectators. Damer speaks specifically of a 10-year old girl participant and her interaction with Rusty (Russell Louis Schweickart), one of the original astronauts on the Apollo mission in 1969 and the virtual anniversary event’s lead facilitator – thusly the authentic voice.

The girl, Julie, asks if she could actually try to re-enact the walk on the moon herself. When Julie’s avatar started to emerge from the spacecraft, Rusty messaged “stop, Julie, you are doing it all wrong… you have to come out backwards… you see, with the moon suit, we couldn’t come out head first, we came out rear-end first.” (Damer, p. 281). Ass-backwards: the wrong way, contrary to what is usual, expected or logical… a hopelessly misguided manner.

While ringing true, I also like to think that Rusty’s messaging was static noise. Indeed, this backward motion, from right to left, doesn’t work on my panorama function (or so I thought). No image is formed because the machine requires a pan from left to right to skip, to stitch, to play. The machine won’t let me go there (but it can).

I cannot help but think of Julie’s co-opted words. When Rusty’s avatar passed through hers and dissolved, she says, “I felt it in my body, I have been touched by an Apollo astronaut and I will never forget this!” (Damer, p.282).

I like to think that Damer’s messaging too was also just static noise and that Julie’s declaration is a misplaced act of self-love. I turn to Legacy Russell’s Glitch Feminism: a manifesto (2020). She says, “Glitch manifests with such variance, generating ruptures between the recognized and recognizable, and amplifying within such ruptures, extending them to become fantastic landscapes of possibility. It is here where we open up the opportunity to recognize and realize ourselves, “reflect(ing)” to truly see one another as we move and modify” (Russell, p.28).

Perhaps we can embrace these greys as a body (mine as I performed the panorama), and as bodies in movement and modification?

Russel says, “Most literally within a technological arc, the presence of a glitch makes the “digital skim” visible, reminding us of the fallibility of the machine and a presence of its hardware, revealing its edges and seams. We rely on the error of glitches to show us the machinic limitations and, in turn, to get a sense of where we might hack further in pointed undoing. Through a more figurative lens, the presence of error offline – an unrecognizable body, a body without a name – reveals cracks in the seemingly glossy narrative of the absolute fixity of gender binary, exposing it as a carefully constructed fiction.” New par: “In these breaks and system failures, we find new beginnings. The digital skin – the screens through which we embrace range, politic via play, and toy with different modes of representation – remains a necessary precondition of the Internet avatar. Avatars can become rhetorical bodies, ones that challenge how and why we perform our abstract and varied selves toward the goal of becoming our truer selves, both on- and offline” (Russell, p. 102).

My unrecognizable grey body is variations performed on a piano’s keys, followed by a refrain that is the burst of an empathic lover’s ballad with more black steps above, followed by a crescendo of two swooshy very light grey lines top right marking the end of an arrow or a star’s tail that exits beyond the corner of the panorama image’s proper end, top right, upward and outward and elsewhere beyond the parameters of the image made to view.

It’s all about perspectives, isn’t it?