This blue tone reads like thick water. Contemporary water, burbling up voyageur ships: the Saturnia from Genoa to Halifax in 1951, carrying my 19 year-old father toward Pier 21 and the interior of Canada: Windsor, (Detroit), North Bay, Toronto. The collection of ship models at the Art Gallery of Ontario, carrying cargo, slaves, disease, innovation. Miniature artefacts of seismic colonization … what to make of them, contextualizing them/me from within a gallery?

It is a non-place because its edges – the panoramic’s edges – are up against itself. The sledge oozes. I think of Roland Barthes’ A Lovers’ Discourse, and the fragment, The Absent One this blue:

"… The other is in a condition of perpetual departure, of journeying; the other is, by vocation, migrant, fugitive; I – I who love, by converse vocation, am sedentary, motionless, at hand, in expectation, nailed to the spot, in suspense …. Amorous absence functions in a single direction, expressed by the one who stays, never by the one who leaves: an always present I is constituted only by confrontation with an always absent you. To speak this absence is from the start to propose that the subject’s place and the other’s place cannot permute; it is to say: “I am loved less than I love.” (Barthes citing Werther, 1977, 2010, p. 13)

There is wetness, slippage between you and I, where the journeying is neither here nor there but precariously on this deck, penniless, without ownership or property. I imagine Hito Steryl’s 2021 installation, SocialSim, described in The New Yorker by Merve Emre. “The piece takes its name from a glitch in a neural network that Steyerl built, which she had trained to say “SocialSim,” but which said “socialism” instead. The smallest of errors, the reversal of two letters, suggests the chasm between two worlds: “socialism,” a world of redistributed power, and “SocialSim,” a world of simulations, of high-resolution images that aim to deceive us about the nature of reality.” (Emre, 2022, The New Yorker, https://www.newyorker.com/culture/persons-of-interest/hito-steyerls-digital-visions).

I stay on this blue panorama, this made-up ocean: a reflected cityscape with its own electrocardiography. The micro-plastic refuse building up along the bottom’s half mounting with futuristic/plastic neuston colonies. 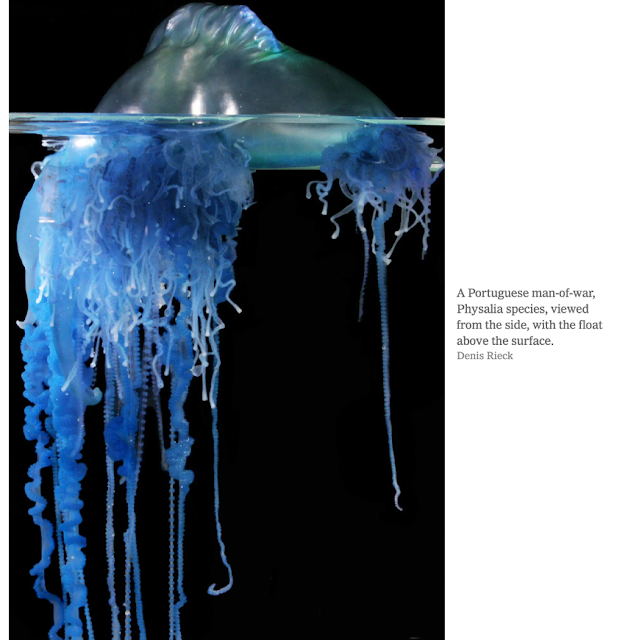