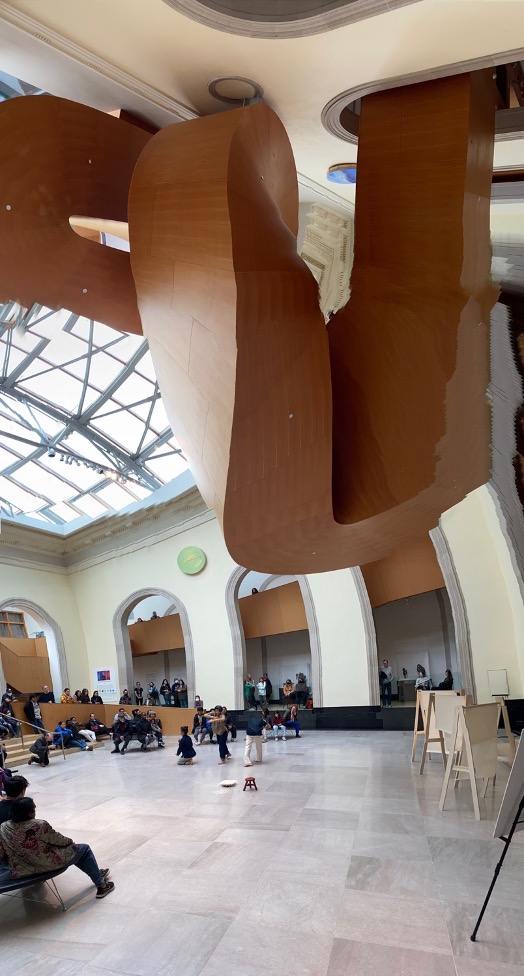 Threading Echoes is a work being developed by Shion Skye Carter, and her collaborators Mayumi Lashbrook and Hitoko Okada. They recently took over AGO’s Walker Court for two public rehearsals where they presented “a unique opportunity to see the history of shifu, a time-honoured, hands-on textile practice from sixth-century Japan, through contemporary dance.” (see Open Rehearsal, AGO).

This is a picture I took in response to what I heard and think the artists were doing by situating themselves underneath the assuming architectural staircase designed by Frank Gehry (see A Spiral Legacy, AGO), in the architecture of Walker Court, named after Sir Edmund Walker, a philanthropist and banker, and first president of the museum until his death in 1924 (see #RetroAGO).

Walker Court was originally designed as a central space to emulate the European style of museum courtyards that display sculptures. Today, this recessed inner sanctum remains largely an open concept space to allow for a range of durational activities. The perimeter’s gallery walk permanently displays sculptures by artists from Inuit backgrounds. It is also the space where donor walls on the south, east and west face inward toward Walker Court. They remind us that Walker Court while seemingly “open air” is literally cloaked in a display of colonial and financial power. Inside the Walker Court are The Seven Grandfathers, a work of Robert Houle, installed in 2014 (see AGO Inside). The information panel is placed inside the Walker Court at eye level, while the drums, situated up high on the walls, resonate in their relational stories, colours, and complicated context. They require of us humility, to listen, think, engage.

Threading Echoes is a work that has been in the making over this past year. The artists have come together through residencies at the AGO and previously at Banff. We have had cumulative moments of remote, virtual and in person gathering, thinking and planning. They have engaged the institution and have also engaged outside institutional frameworks. That said, the artists have collaborated while respectively living in Vancouver, Hamilton and Toronto, while doing art and life.

The AGO’s residency theme this year is “friendships near and far,” wherein I learn and relearned through our artist collaborators and colleagues that engagement requires negotiation, both space, time and conceptual barriers to give, while also yielding to institutional deadlines, web builds and annual reports. But also the idea of abiding with… such as, in due time, and at the right place…

Threading Echoes combines both object-making and dance-performance, entwining and embodying themselves as both action-movement and artefact-making. The artists’ proposed final work for the AGO residency is a film that will capture through a sequence of edit shots this movement-making dialogue, in dialogue too with the architecture of Walker Court. Okada tells me the institutional trauma of a space such as Walker Court is part of what and why this radiates out and up in circular movements of weaving and dancing. I offer that their work echoes Byung Chul-Han’s The Scent of Time: A philosophical Essay on the Art of Lingering (2017/21). Like incense, he suggests that time moves upward in a non-linear billowy multi-sensorial fashion. Letting go, falling down, rising up, pushing off, gathering up: these are all gestures performed in their open rehearsal.

Here precisely is where I believe art and design collapse difference: both must engage with their context and space to allow self-reflection, to listen and to tease new possibilities with diverse peoples intact, thriving even. In a similar manner, Dr. Dori Tunstall, Design Dean at OCADU, describes how she “designs the conditions of possibility” for others to thrive (OCADU’s Dori Tunstall on Decolonizing And Indigenizing Design Education, Sydney Shilling, Azure, October 5, 2022). Both Tunstall’s methodology and the promise of Threading Echoes speak to the unfinishable work of the designer and the artist, whose end-user is baked in a community of practice-making-movement-knowledge with them. They also resonate, for me, the illusive nature of curiosity carved out by Perry Zurn and Arjun Shankar in Curiosity Studies: A new Ecology of Knowledge (2020): that we might all share this meaning-making space to favour our respective curiosities unencumbered by a destructive drive for innovation that upholds structures of power in select hands.

I chose to follow the actions of Threading Echoes as I watch Hitoko, Mayumi, Shion, the people gathered, the drums, the floor and walls, and my own shadow from the gallery, spin nearly intangible threads quickly then slowly up toward a twisting staircase upturned on its head as if we are weaving a different sweater altogether.

A Spiral Legacy: The AGO’s iconic, Frank Gehry-designed spiral staircase is one of the most distinctive architectural features in Toronto. September 22, 2021 https://ago.ca/agoinsider/spiral-legacy

#RetroAGO: “Walker” mile in our history: AGO’s Walker Court is 94 years old! Take a look back on its past, and the museum founder it was named after. February 4, 2020 https://ago.ca/agoinsider/retroago-walker-mile-our-history

AGO Inside: Walker Court https://ago.ca/learn/ago-makes/ago-inside-walker-court

I contributed a small piece for the 2023 Interior Design Show magazine. Above was my first draft. The second edited version that follows reflects copyright reviews and recommendations, and a gentle finessing from the AGO's communications team. While the invitation to contribute image and text is an opportunity to impart personal experience, context changes the inflexion of my ethics and voice, whether within and outside of the museum.

My self-reflexivity may flex

as my community of makers weave 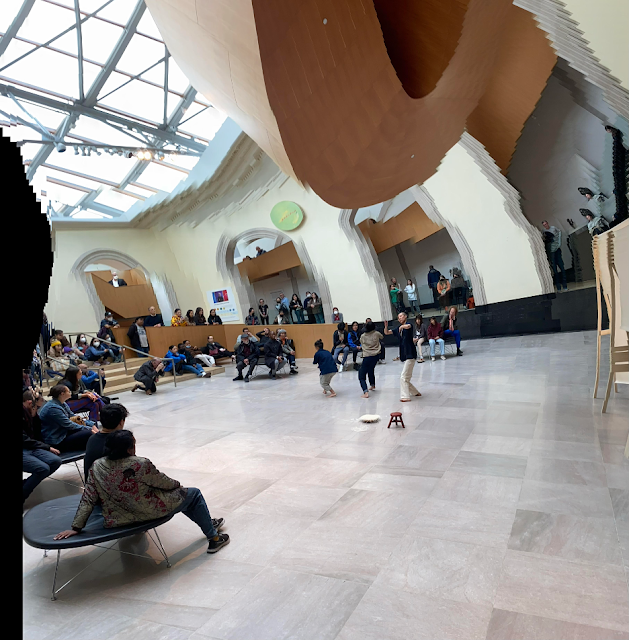 Art and design are incredibly related. In both disciplines, we’re thinking about engaging with people and forming communities. In 2002 I watched an open rehearsal of a performance at the Art Gallery of Ontario (AGO) that encapsulated this connection between art and design.

Threading Echoes, developed by Shion Skye Carter, Mayumi Lashbrook, and Hitoko Okada in the 2022 AGO x RBC Artist-in-Residence Program, combines both object-making and dance-performance, embodying the practice of weaving. Their work shares the history of shifu, a time-honoured, hands-on textile practice from sixth-century Japan, through contemporary dance. Their movements included weaving the paper thread. A large paper ball was also made. The project also reckons with the institution’s architecture, its histories and power structures.

Here’s this picture I created as they were performing at the AGO. We are in Walker Court, which was named after Sir Edmund Walker, a philanthropist and banker, and first president of the AGO. Walker Court was originally designed as a central space to emulate the European style of museum courtyards that display sculptures. Today it remains largely open concept and our team at the AGO facilitates a range of performances, art experiences, and gatherings. Around this space are sculptures by Inuit artists, and walls with donor names. Inside the Walker Court are The Seven Grandfathers, a work of Robert Houle, situated up high towards the skylight: the seven ceremonial drums, made specifically for this space, resonate in their traditional teachings and complicated context, filling and enlivening the entire space. Carter, Lashbrook and Okada performed underneath the AGO’s spiral staircase designed by Frank Gehry. In my photo, I glitched the experience so all of this, the moment, the space and the performance, doesn’t feel so fixed for posterity.

Okada tells me their movements radiate out and up in part to work through the institutional trauma of a space. I offer that their work echoes words in Byung Chul-Han’s The Scent of Time: A philosophical Essay on the Art of Lingering (2017/21). Like incense, he suggests that time moves upward in a non-linear billowy multi-sensorial fashion. Letting go, falling down, rising up, pushing off, gathering up: these are all gestures performed in their open rehearsal. The artists toss their billowy ball in the air as a liberating gesture. It is a light big puff of air. During their performance, Walker Court has become different for me. It feels more like a site for enjoying our differences, and letting go.

Art and design engage with their context and space to allow self-reflection, toward healings and liberations, to listen, and to tease new possibilities with diverse peoples intact, thriving even. That is what we experienced in that moment – the slow magic of art and design, and our coming together. The rehearsal of Threading Echoes speaks to unfinishable work. I watched Carter, Lashbrook, Okada, the people gathered, Houle’s artwork, the floor and walls, and my own shadow from my camera phone, settle upon the scene; the artists spinning nearly intangible threads quickly then slowly up toward a twisting staircase upturned on its head as if we are weaving a different sweater all together.

Paola Poletto is Director of Engagement & Learning at the AGO. Her art practice includes photography, writing and creative collaboration.