The squares are blueprints for translation to the loom, pixelations for machine weaving

they are for glitch

These are memories of dreams.

There have been echoes in this incarnation.

I came to accept the idea of reincarnation,

And when I was 29 the carpet cartoons came to me. 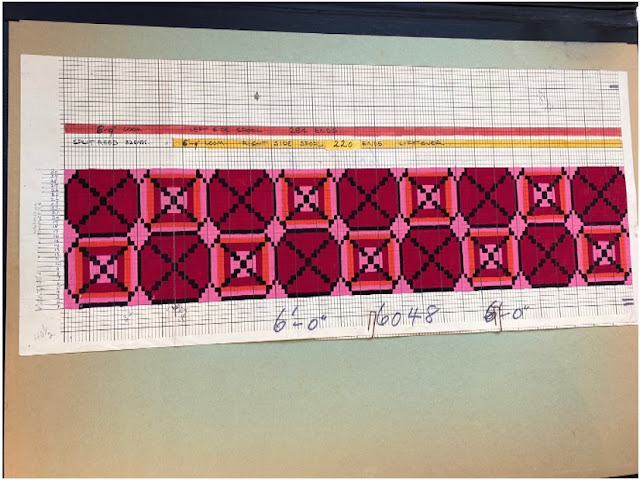 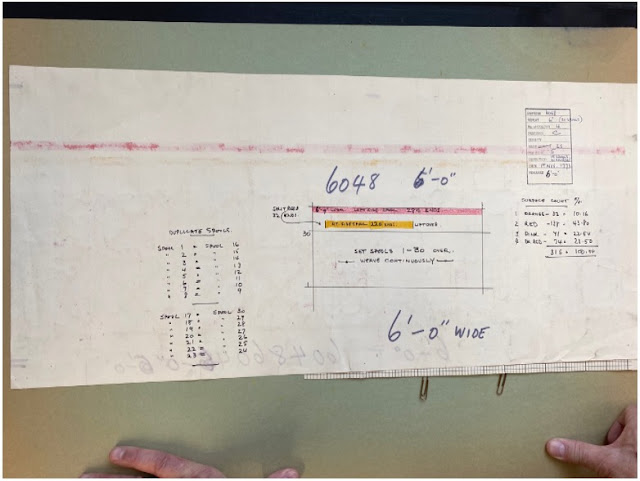 Carpet cartoon salvaged from the Toronto Carpet Manufacturing Company by Flavio Belli in 1979. Collection of Flavio Belli. Photo of front and back with Belli’s hands by Paola Poletto, December 15, 2022.

Flavio Belli is an artist that works in square inches.

Angelo’s Restaurant on Chestnut and Edward Streets preceded Old Angelo’s on Elm between Yonge and Bay Streets on the Toronto map.

Flavio Belli preferred the artist’s studio to the family business:

he is a stranger and an ally in the art-world.

1880’s – The Glionnas, an Italian family of street musicians from New York build a saloon/ boarding house in Toronto at Chestnut and Edward Streets.

1891 – Toronto Carpet Manufacturing Company is established by F. Barry Hayes in Toronto. It moves into an impressive new factory at 1179 King St. W. and 74 Fraser Ave in 1899.

1904 – Athelstan Kimberlee born in England. Emigrates to Canada in 1916 to work at the Toronto Carpet Manufacturing Company.

1941, April 8 – Athelstan Kimberlee completes carpet cartoon that will be owned by Cliff Simon.

1979 – Flavio Belli moves into a new studio in the former Toronto Carpet Manufacturing Company, owned by Max Swartz. Belli saves furniture, blueprints, archives, and carpet cartoons from demolition. There are 16 large “Oriental”, “Persian” and Masonic carpet designs lining Belli’s studio wall. An artist pokes his head inside the door and yells, I want to fuck in this room. Max Swartz pays for framing the cartoons and Belli formally exhibits the Isaacs Gallery on Yonge Street. A second show is mounted at the O’Keefe Centre on Front Street in 1980. 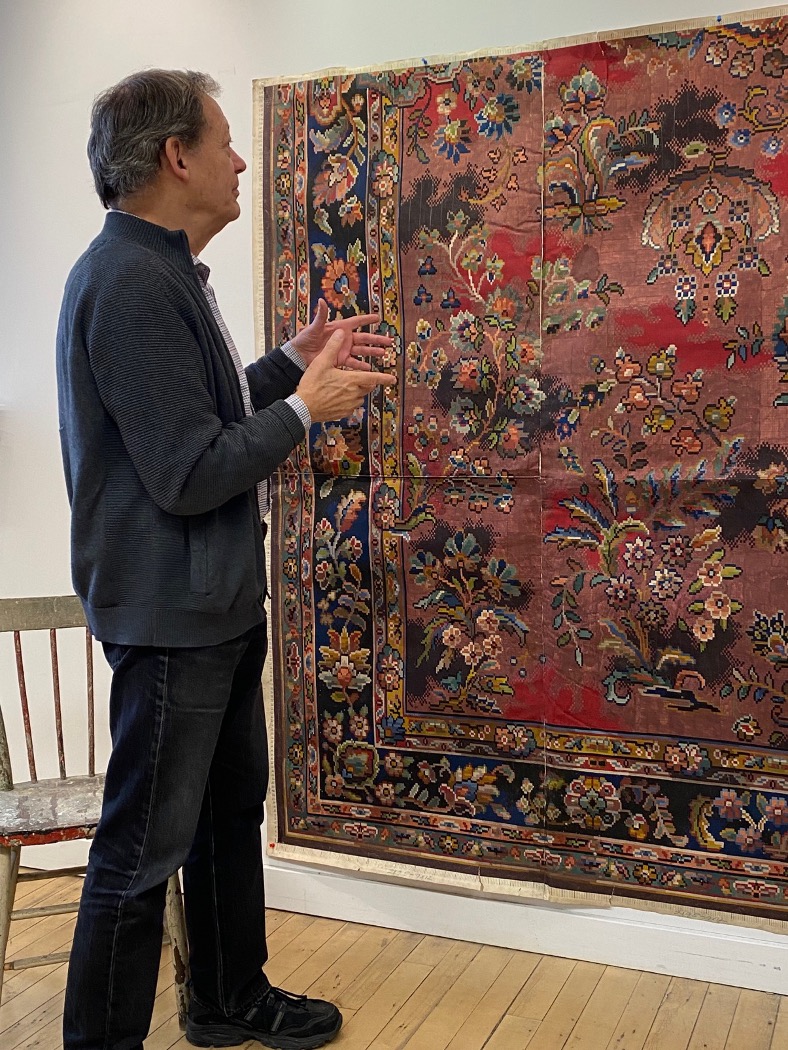 2022 – Cliff Simon offers Belli the cartoon that had long ago been traded in exchange for his labour on the Flavio Belli Gallery sign. Simon’s neighbour, Tony, unframes the cartoon to ship back to Toronto. Belli pins up the cartoon and posts an image online. We rendezvous in Belli’s studio at 180 Shaw Street, where he describes the cartoon as a 4.5’ x 6’ version of a 9’ x 12’ carpet design, for the Jacquard loom. The cartoon represents one-quarter of the carpet to scale. The pattern would be repeated to scale four times to complete the carpet’s design.  The cartoon is signed Athelstan Kimberlee, April 8,1941.

There was a lone child sent off to Canada, to avoid/escape the first world war.

I asked Athelstan why there were red and black cloudy patches in the carpet’s design. He explained how they would break the patterns with them so children could play with wheeled toys on the carpets, and not wear out imaginary paths through the lavish gardens.