This is an aerial view of land parcels. I could be flying over any number of landscapes where there is division of land, ownership and variated use. I am looking down upon them, complicit as a settler with an agrarian+ Italian family history, above it while flying to another country from Toronto to holiday. Iran’s national flag waves horizontally the colours green, white and red; mirrored are Italy’s own colours set upon a vertical axis and where both are variating and intermingling in the wind with raised arms. 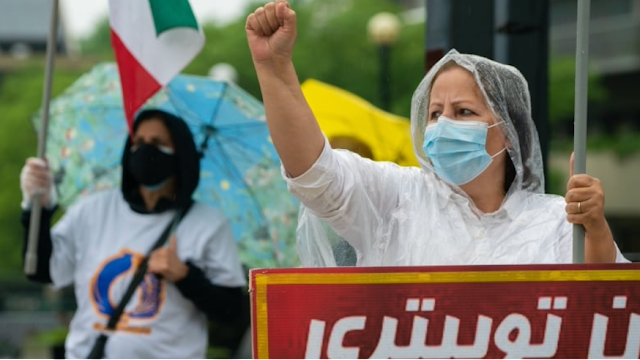 Protesters in Toronto rally against an Iranian election they call a 'sham', June 19, 2021: A woman dons a raincoat and chants during the North York, Ont., demonstration on Friday, June 18, 2021, in spite of the rain. (Sam Nar/CBC)CBC News, Written by Laura Howells, with files from Jessica Cheung, the Associated Press and Reuters. Screen capture March 12, 2022

In Walking Methodologies in a More-than-Human World, Springgay and Truman cite Haraway’s “non-innocent knottings” as method-making that mobilizes “an ethics of inhabitation, which entangles the situatedness of corporeal knowledge, the movement of walking, and the large geopolitical realm of White supremacy and nationalism (Stacy Alaimo cited in Springgay and Truman, 2018, p.95). Surely, walking this rectangle of the reflecting

nearby my home is a sort of privilege of my able body, and the privilege too of walking a civic space once fronting the city-hall of a city, North York, since swallowed up through Toronto’s amalgamation in 1998. A civic space nonetheless that marks forms of protest from marginalized communities who chose it over Nathan Philips Square or Queen’s Park, such as the one against the 2021 Iranian election (June 19, 2021), or the one fighting for accountability for the victims of the plane shot down by Iran in 2020 carrying 176 people (138 of those on Ukraine International Airlines Flight 752 from Tehran to Kyiv were travelling to Canada via Ukraine) (Jan 12, 2020).

I know rather, that this land-in-movement-from-airplane is a reflection of colonial and capitalist structures and, as me, on the ground, and cell-phone in hand, it is the textured concrete on the edge of the reflecting pool intended to keep anyone of us from slipping as we descend onto the ice. Those lines that mark out rectangles on the ground are a stitch-skipped fallen guard rail, no longer in use to keep eager skaters in line vying for a chance in 15 to skate on the ice during a winter of COVID restrictions in 2021.

Indeed, the reflecting pool is my self-reflexive mirror, an “instrument(s) of doubling” that women might use – allowing someone to see herself as something outside herself” (Simone de Beauvoir in Fournier, 2021, p.44; me in Duras in glitch3). Both moving across the land from above in the airplane (in the machine) and walking the pool’s perimeter with machine in hand (the cell phone, the phantom skates in the other), I am both object and subject, immobile and mobile, subjective and active.